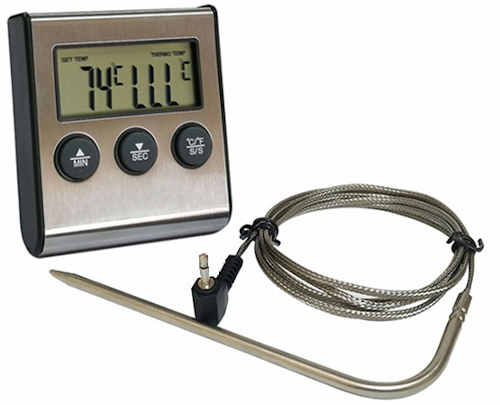 To cook food sous vide, at low temperatures, it is essential to have an accurate and temperature stable cooking chamber such as a Combi Oven, a fixed thermoregulated water bath or a water bath regulated by an immersion circulator. But this is not enough. Indeed, it is very important, at all times, to be able to measure the core temperature of the food in the sous vide pouch. For long cooking, at night for example, the question does not arise. But if you do "short-time" cooking, reheating preparations or just update or redo your restaurant menu and need to perform tests, then it will be very useful to equip yourself with a thermometer with a needle probe.
In sous vide cooking, a "classic" oven thermometer is not suitable, mainly for the 3 reasons as follow:

CONCLUSION: In sous vide cooking you need a special thermometer and temperature probe!

An electronic oven thermometer is made up of 2 parts: the thermometer (main body) that contains with its printing Circuit Board and its measurement system, and the temperature probe with its cable and plug.

Thermometer accuracy:
The measurement system of your thermometer is at the heart of the device. It contains a Printed Circuit Board with complex components. These components, depending on their quality, may lose precision over time. The manufacturer of a thermometer must state the accuracy of the measurement system in his data sheet. In addition, it must also indicate the accuracy of the temperature sensor/probe. These 2 pieces of information are inseparable. 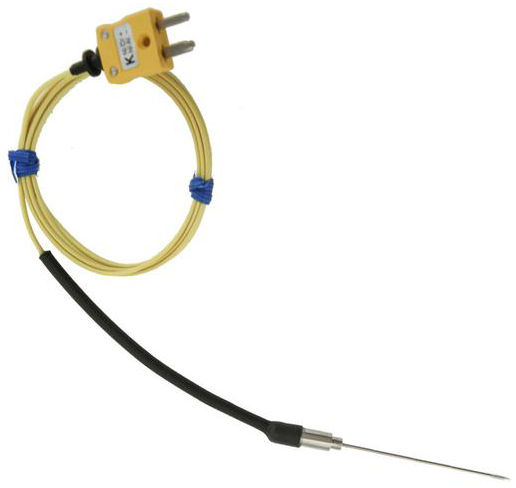 Accuracy of the temperature probe
Few people know this, but on the market for cooking thermometers, 2 probe technologies are globally represented: the Type K Thermocouple and the Platinum.

1. Type K thermocouple probe
It is the best known probe. Often cooks even refer to their cooking thermometer by the generic term "Thermocouple". This is obviously an abuse of language.
This technology is very frequently used in the industry because it is inexpensive and precise. Unfortunately the Type K Thermocouple suffers from major faults...

...Which degrades over time.
The Type K Thermocouple deteriorates over time and may even become defective. This is the reason why a thermometer with Thermocouple Type K probe must be checked at least every 2 years!

No electronic component...
Unlike the Type K Thermocouple probe, the Platinum probe (Pt) is made of a piece of metal (Platinum) which is inserted into the probe tube. It is for this reason that the Platinum probes are slightly thicker than the Type K Thermocouples probes. This also makes them much more resistant to handling and to the risk of breakage!

...and which does not change over time.
The piece of Platinum contained in the probe does not degrade over time and, unlike the electronic component of the Type K Thermocouple, cannot fail. This type of probe is therefore very reliable.

Faults which may affect a cooking thermometer:
- the temperature probe twists and breaks,
- the displayed temperature is incorrect or represents a very large temperature deviation from reality.

Chefs who use Type K Thermocouple probes know that it is not unusual a needle probe twists and breaks.
Theoretically, you just have to buy a new probe and connect it to the thermometer. Unfortunately it is improper to do so. When you replace a probe you should check if the electronics of your thermometer (main device) is correctly calibrated to the Type K probe. Otherwise you could have temperature differences of ± 2 °C! Verification must be done with an authorised body which is usually not cheap.
Although this is less common than with the Type K Thermocouple, a platinum probe can also twist and break. In this case, you just have to buy another platinum probe and plug it directly into the thermometer. The Platinum probe is so precise that there is no need to check its accuracy. Your Thermometer and Platinum Probe set will remain immutable! This is an undeniable advantage.

Owners of Type K Thermocouple thermometers should theoretically have the calibration of their equipment checked every 2 years. Otherwise, very large deviations could occur. Verification and recalibration must be done with an authorised body. This is costly. Platinum probe users do not have to worry about calibration issues. Their equipment will always be perfectly precise.

Tips and tricks: if you have a SWID Premium immersion circulator you can test your cooking thermometer by immersing it in a small pot (about 8 liters) that is thermoregulated by the SWID. Indeed, the SWID has a platinum probe to control the temperature of the water bath. Thus you will have the possibility of knowing the imprecision of your thermocouple type K thermometer without going through a authorised body. It will then be necessary to write on your thermometer the recorded deviation to take it into account when measuring a temperature at the heart of a food.

In other words, is it possible, for example, to use a single thermometer and several probes to take the core temperature of different bags during the same service? This should be absolutely avoided with a Thermocouple Type K thermometer. Indeed, the temperature measurement system of the thermometer (main device) and the probe must be calibrated together. If you change the probe, you should recalibrate the new probe each time with the thermometer. Otherwise you could have temperature discrepancy of ± 2 °C!
Due to its extreme reliability, with a Platinum thermometer, it is however quite possible to interchange the probes.

This is not essential but it is an undeniable plus to be notified when the desired core temperature is reached. Few thermometers benefit from this option. However, to redo or update a restaurant menu, to proceed to cooking tests or to know how quickly the core temperature will be reached during a reheating, a thermometer with alarm will be very useful. 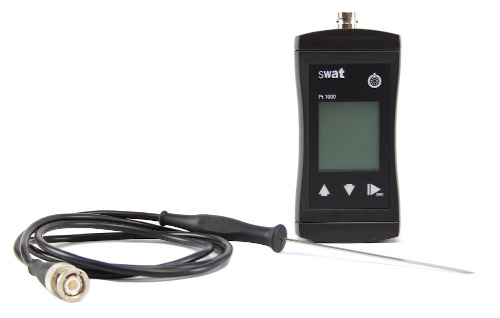 Most cooking thermometers on the market are laboratory thermometers that have been designed for applications other than sous vide cooking. The thermometer that we have chosen brings together all the necessary functionalities for sous vide cooking: accuracy, reliability over time, alarm, secured probe plug with rotating ring to prevent accident fall of the thermometer...
This product is designed and manufactured in Germany. Its price is competitive compared to Thermocouple Type K thermometers on the market. Useful and practical accessories are available with this product: protective case, suction fixation system...